December 23, 1943: “Hoping…the bad moments that we are all going through will soon be ended.” 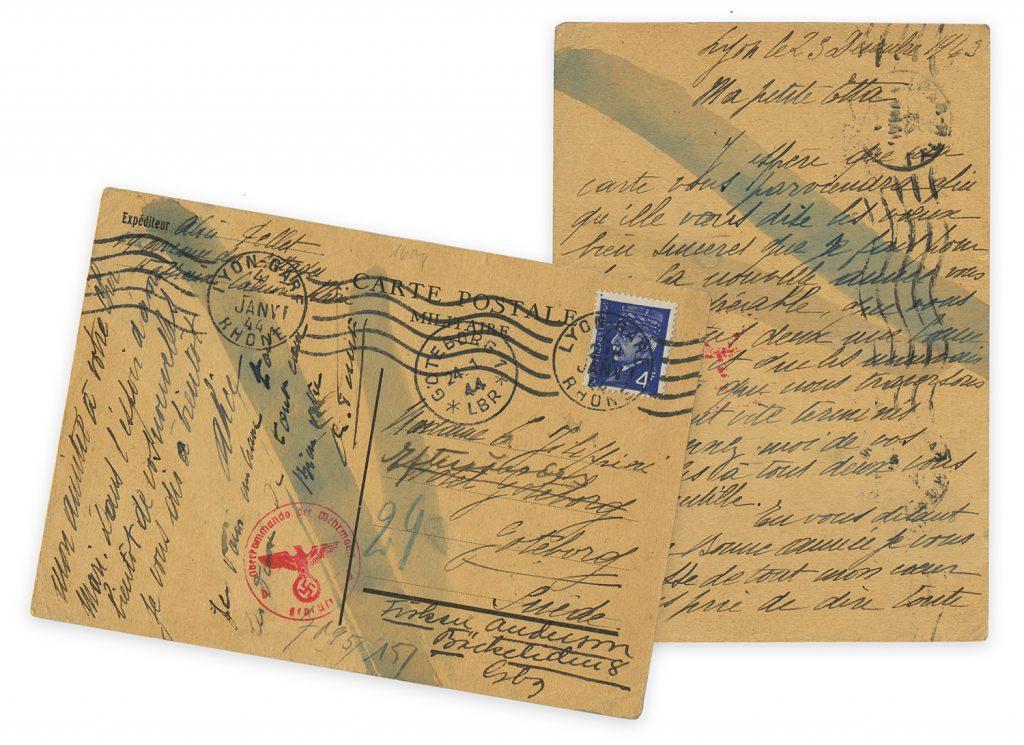 I hope that this card will give you the most sincere wishes that I am sending, hoping that the new year will be good for you, and that both of you will enjoy good health and that the bad moments that we are all going through will soon be ended.

Send me news about both of you, please.

In wishing you a happy new year again, I send you all my love and ask you to give all my love to your dear husband. In the hope of hearing from you soon, I will say ‘Hope to see you soon’.
Alice

Love from the bottom of my heart,
Sincerely,
A. Jellet

Click here to read another war-time postcard written by a woman.

Translator’s notes:
1.  The card was addressed to Madame E. Filippinni. The street address has been blocked off by a word that is probably Swedish for ‘no longer at this address,’ and it looks like the correct address in Goteborg [‘Gbg’], Sweden is written at the bottom.
2.  Alice wrote this on December 23, 1943; it was postmarked at the Lyon train station on January 4, 1944, and postmarked in Goteborg on January 24. That seems like a long time for mail to travel a distance of 880 miles but that was wartime, and I’m sure that German military mail was given priority over civilian mail.
3.  The French stamp shows Marshall Philippe Pétain, the leader of the Vichy government, France Libre [Free France] which was the puppet government controlled by the Germans.
4.  And, of course, the red Highcommand Nazi stamp. Chilling.

Additional notes from Carolyn:
1. There isn’t anything that indicates Alice was a forced laborer; her return address doesn’t appear to include the word “Lager” or anything else that would be a give-away. Nonetheless, note the multiple censor marks—including the Oberkommando stamp—along with the blue chemical censor swashes and multiple pencil marks. Wherever she worked, she may have had access to what the Germans considered valuable intelligence.
2.  The return address is hard to decipher, but it appears to read “Rhône.” Rhône is not far from Lyon, so perhaps she mailed the card when she traveled to or through Lyon.