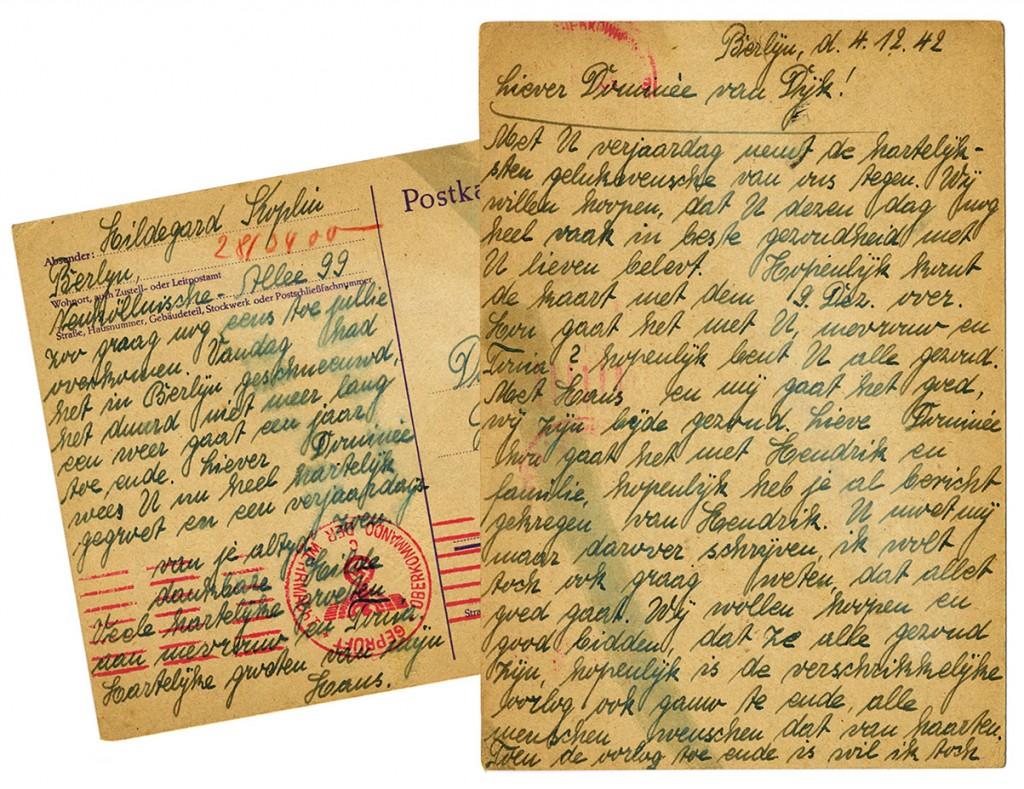 I presume this postcard was written by a Dutch laborer; clues include the date, the censor marks, the fact she was in Berlin. Postcards like this are fascinating because they are a window into a moment of time. In this case, the moment is not only filled with a longing to see her old friend, but generous, abundant, happy wishes for Vicar van Dijk’s birthday. In my opinion, Hildegard’s ability to think of another’s happiness during the middle of war is remarkable.

We send you our warmest wishes on your Birthday. We will hope you will be able to celebrate this day many more times in good health and in company of your loved-ones. I hope this card receives your 9 December. How are you, your wife and Tonia doing? I hope you are all in good health. Hans and I are doing well, we both are healthy. Dear vicar how is Hendrik and his family doing? I hope you already received a message from them. You should write to me about that than I have to know they are doing fine. We will hope and pray to God that they are all healthy. I hope that dreadful war will end soon. All people wish so by heart. When the war has come to an end I would so very much like to visit you again. Today it snowed in Berlin. It won’t take long now before another year comes to an end. Dear vicar be very warm greeted and a birthday-kiss from your always grateful Hilde.

A huge thank you to Arlette Danes for the translation work. She noted the card had been written in the “Old Dutch” style, which, when combined with some writing errors provided an extra challenge.

———
Postscript June 13, 2017
I received an email from reader Jan van Es who had some interesting observations about this letter. Jan wrote:

“On this page, you write: ‘I presume this postcard was written by a Dutch laborer,’ but I’m practically certain that was not the case.

After WW1, it was not unusual for German girls to go work as a maid in the Netherlands for some time. Times were very bad in Germany, and millions of German men had died in the great war. In 1934, there were some 40,000 German girls working as a maid in the Netherlands. That’s when the German government started trying to convince (and in 1938, force) these girls to come back home. By the way,  in some cases, the girls would also work as spies for the German “Abwehr”: the Germans needed information for the preparation of the invasion of 1940.

It is true that the written Dutch from 1942 is slightly different from present-day Dutch, the Dutch language has undergone several spelling reforms since then. And obviously, people can always make spelling mistakes, even in their mother tongue. However, when reading it, it becomes immediately clear that this card was written by someone with only a limited knowledge of Dutch.

She mixes up the formal (“wees U nu heel hartelijk gegroet”) and familiar forms (“hopenlijk heb je al bericht gekregen”), uses German date notation (“met dem 9. Dez.”) and makes lots of other little and big mistakes that a native speaker would not make, and that suggest that the writer was in fact German-speaking. Possibly, Hildegard spent some months or years working as a maid at the vicarage in the Netherlands? Pure speculation, of course.

The problem in reading the postcard is that firstly, Hildegards handwriting style seems somewhat influenced by older German handwriting styles (Google “Kurrent” and “Sütterlin” to see what I mean). But secondly and more importantly, words are misspelled or used incorrectly, and sentences are a strange mish-mash of German and Dutch that’s better understandable for someone with some knowledge of German. “Liever” (used twice) means something like “preferably” in Dutch, but clearly she meant to say “Lieve” (in German: “Lieber”). “Een weer gaat een jaar toe ende” was probably written with the German “Und wieder geht ein Jahr zu Ende” in mind, but in correct Dutch would be something like “En weer loopt een jaar ten einde”; German “zu” and Dutch “toe” sound very similar, but cannot be used in the same way (although semantically they’re close). The word “belevt” is close to the German “belebt,” but correct written Dutch would  be “beleeft” (but German pronunciation of “belevt” would be almost exactly like the Dutch pronunciation of  “beleeft”). I’m sure that the vicar understood her perfectly, though!

If that’s not enough proof, there’s the name and address: firstly, “Hildegard Koplin” does not sound very Dutch. The address,  Neuköllnische Allee 99, Berlin, offers further proof: In the “Berliner Adreßbuch 1942” (Berlin address directory 1942, available online), we find Hans Koplin, of profession “Zeichner,” living at this address in the Neukölln district. Zeichner means draftsman, drafting technician (although it can also mean illustrator, designer, etc.) This is of course the Hans mentioned in the text. (The page in the address directory shows that there were five more men with the same name living in Berlin: a plumber, a teacher, a locksmith, a truckdriver and a carpenter.)

So this card was sent from a Berlin couple to a Dutch acquaintance for his birthday. You don’t show the address the card was sent to, but the fact that the addressee was a vicar should make it easy to identify him (even though “van Dijk” is a very common name in the Netherlands). Also, the text seems to suggest that his birthday is December 9th.”

Thanks for your detailed observations and your detective work, Jan!