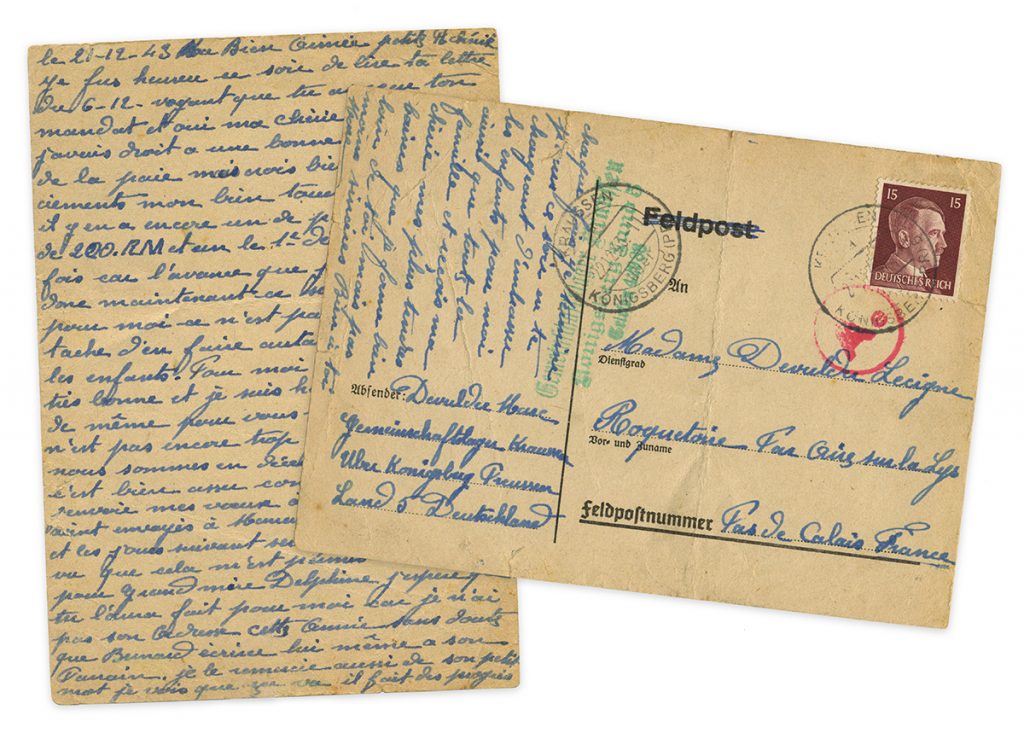 I was happy this evening to read your letter of December 6, learning that you received your money order and yes, my darling, so far I have had a good amount on pay day but believe me, your words of thanks touched me also this evening.

There’s another money order from the 1st [unclear] of 200RM, and one on December 1 for 150 this time because the advance that I had has gone and now will always be 150. I don’t need much and I want to do as much as I can for you and the children. My health is still very good and I am happy to know that it’s the same for all of you. The weather isn’t too cold yet, although it’s December. It’s like that this evening. Send my regards to Henri. I sent greetings to Marianne Zelie and Aunt [unclear] and the next day will be for the others since I’m permitted to do that this year. For Grandmother Delphine, I hope that you will send her my greetings, too, because I don’t have her address. This year Bernard himself will write to his godfather. I thank him also for his note. I see that he’s getting better every time. I’m ending this evening by asking you to kiss the children for me, as well as the whole family, and receive, my darling, my most tender kisses that I form very far from you but are no less sincere.

Love to you,
Marc

Notes from the translator, Janet:
1. Since this is written with very little punctuation or capital letters to indicate new sentences, I added them as it seemed appropriate. Most writers used all the space possible for the message.
2. Language note: Tes remerciements mon bien touchés.’ à Tes remerciements m’ont bien touchés. The words sound the same.
3. Language note: Il n’est pas encore trop froid.’à Il ne fait pas encore trop froid. For weather, in French one says literally ‘It makes cold.’ but the writer says ‘It is cold.’ which is used to describe an object that is cold. Small point, but this is in the curriculum of French I classes.
4. The wife’s name is Lecigne, an unusual name that sounds and looks like le cygne, the swan.
5. The card was addressed to Mrs. Lecigne Devulder, Roquetierie, Pas Oise sur la Lys, Pas de Calais, France. The return address reads: Marc Devulder, Geminschaftslager [work camp?] Kraussen, Uber [Upper] Konigsburg, Prussian Land, Germany