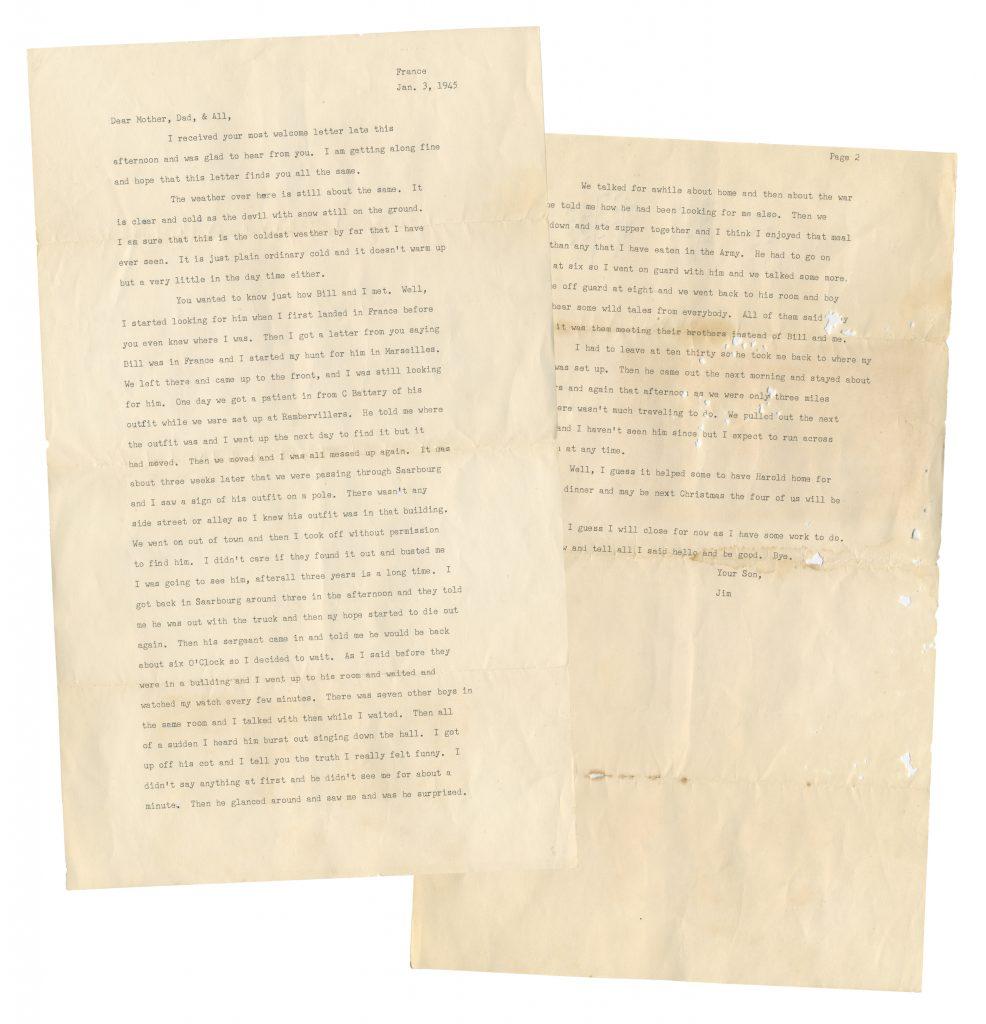 Typically I’m interested in handwritten letters, but this typed letter portrayed such a touching moment I had to buy it. The brothers’ reunion actually made me a little teary-eyed. I hope you enjoy reading it!

I received your most welcome letter late this afternoon and was glad to hear from you. I am getting along fine and hope that this letter finds you all the same.

The weather over here is still about the same. It is clear and cold as the devil with snow still on the ground. I am sure that this is the coldest weather by far that I have ever seen. It is just plain ordinary cold and it doesn’t warm up but a very little in the day time either.

You wanted to know just how Bill and I met. Well, I started looking for him when I first landed in France before you even knew where I was. Then I got a letter from you saying Bill was in France and I started my hunt for him in Marseilles. We left there and came up to the front, and I was still looking for him. One day we got a patient in from C Battery of his outfit while we were set up in Rambervillers. He told me where the outfit was and I went up the next day to find it but it had moved. Then we moved and I was all messed up again. It was about three weeks later that we were passing through Saarbourg and I saw a sign of his outfit on a pole. There wasn’t any side street or alley so I knew his outfit was in that building. We went on out of town and then I took off without permission to find him. I didn’t care if they found it out and busted me I was going to see him, after all three years is a long time. I got back in Saarbourg around three in the afternoon and they told me he was out with the truck and then my hope started to die out again. Then his sergeant came in and told me he would be back about six O’Clock so I decided to wait. As I said before they were in a building and I went up to his room and waited and watched my watch every few minutes. There was seven other boys in the same room and I talked with them while I waited. Then all of a sudden I heard him burst out singing down the hall. I got up off his cot and I tell you the truth I felt funny. I didn’t say anything at first and he didn’t see me for about a minute. Then he glanced around and saw me and was he surprised.

We talked for a while about home and then about the war and he told me how he had been looking for me also. Then we went down and ate supper together and I think I enjoyed that meal more than any that I have eaten in the Army. He had to go on guard at six so I went on guard with him and we talked some more. He came off guard at eight and we went back to his room and boy did I hear some wild tales from everybody. All of them said they wished it was them meeting their brothers instead of Bill and me.

Well, I guess it helped some to have Harold home for Christmas dinner and may be next Christmas the four of us will be home.

I guess I will close for now as I have some work to to. Bye for now and tell all I said hello and be good. Bye