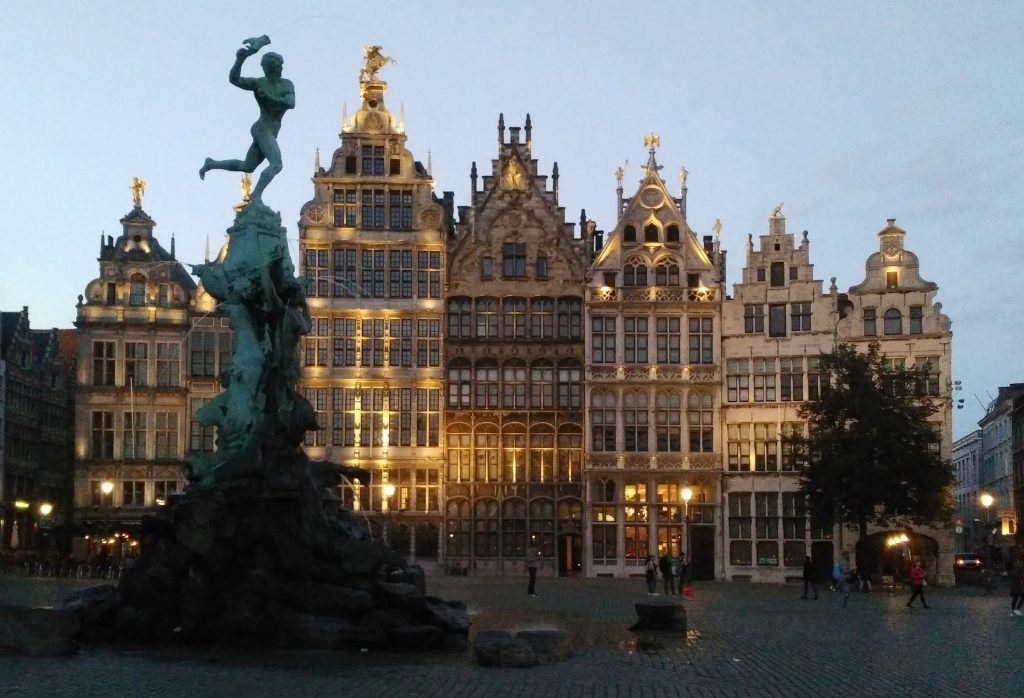 Aaron came along to Antwerp. Since he has no interest in type, he spent the week sightseeing and touring breweries. Poor guy. Meanwhile, I attended a workshop on designing diacritics and sat through lectures on the design, history, and culture of type. Here’s one random fact I learned: the band KISS has an alternate version of their logo for use in Germany. Why? The lightening-bolt-shaped letters “SS” are forbidden because the use and display of Nazi symbols is outlawed.

After the conference, Aaron and I traveled to Paris and settled into a room in Paris’s 2nd Arrondissement. We spent the three days wandering the streets and soaking in the sights. We toured Saint Chapelle, gazed at the dome at Galeries Lafayette, and wandered through markets and gardens. We also walked around Ile St. Louis, the smaller of Paris’s two islands. Louise Dillery, one of the two translators I worked with, lived on Ile St. Louis during the war and I have heard many amazing stories of her years living on Ile St. Louis. 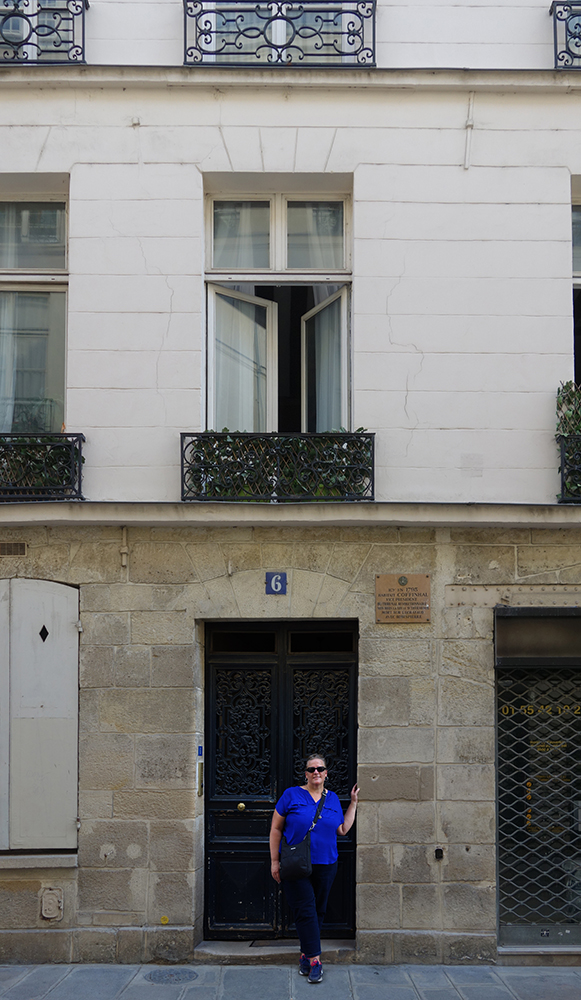 Standing in front of 6 Rue de Regrattier, Ile Saint Louis, Paris, the WWII home of Louise Dillery.
The apartment where she Louise faced the courtyard, not the street,
and we were unable to go inside the building to see more.

Several people, when they heard about our forthcoming trip to Paris, inquired whether Aaron would finally get to see Les Invalides, the museum he had hoped to see in 2012—but wasn’t able to—after Valentine generously offered to take us to Berchères-la-Maingot (page 297 of Marcel’s Letters).During the previous six years, whenever Aaron joked that I still owed him a trip to Les Invalides, I promised he would get there someday. I’m happy to report that we spent an entire afternoon viewing the museum’s incredible collection of Medieval armor, military uniforms, detailed models of 18th Century forts, and more. 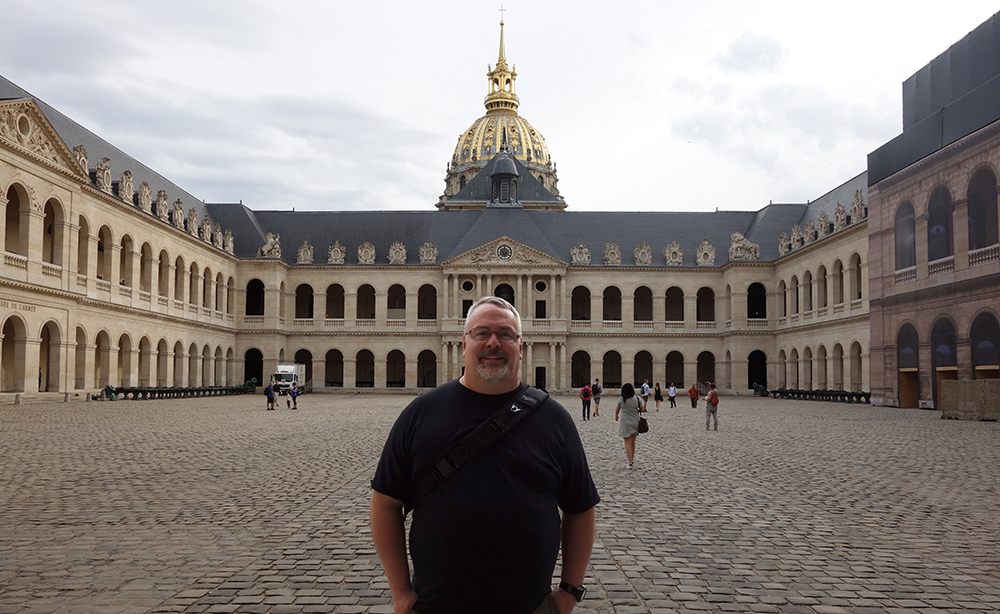 I made Aaron pose inside the Musée de l’Armée’s Court of Honor so I had photographic proofhe finally got to visit! The gold dome in the background sits above Napoleon’s Tomb.

Thursday morning, Sept. 20, Aaron and I took a RER train to Villemomble, one of Paris’s eastern suburbs. There, at the station, Agnès (Suzanne’s daughter) greeted us with outstretched arms and cheek kisses. Agnès’s daughter, Eugénie, was there, too; Eugénie would do a masterful job of translating all afternoon. At the station we also had the honor of meeting Valerie (Eliane’s daughter/Agnès’s cousin) for the very first time.When I visit with book clubs, readers often ask whether Marcel’s letters have brought the family together. “Families are complicated,” I’ll often reply. But, it sometimes feels like his letters are indeed slowly stitching back together seams that had come apart. That day was the first time in fifteen years Agnès and Valerie had seen each other in person. For Nadine (Suzanne’s daughter/Agnès’s sister) and Valerie, it was closer to twenty-three years. Valerie had never met Eugénie in person before.We walked to a nearby restaurant, where Nadine joined us. It didn’t take long to settle into laugh-filled banter as if no time at all had passed.Agnès handed a framed certificate across the table, one that I was happy to finally see. In late June, Marcel’s Letters was named a winner of the biography/autobiography category at the Paris Book Festival. I was not able to attend the award ceremony—but Agnès and Nadine did! I was so happy they attended the evening’s dinner and celebration, accepted the award, and were—and are—a part of this story as it continues to unfold.As we ate lunch, I shared anecdotes I have heard from readers, we talked about Eugénie’s film-school studies, Nadine’s three rambunctious grandsons, their continuing genealogy research (they are up to 1,200 names), and much more. The time went fast, and before we knew it, Nadine had to return to work, and it was time for the rest of us to continue on our adventure. 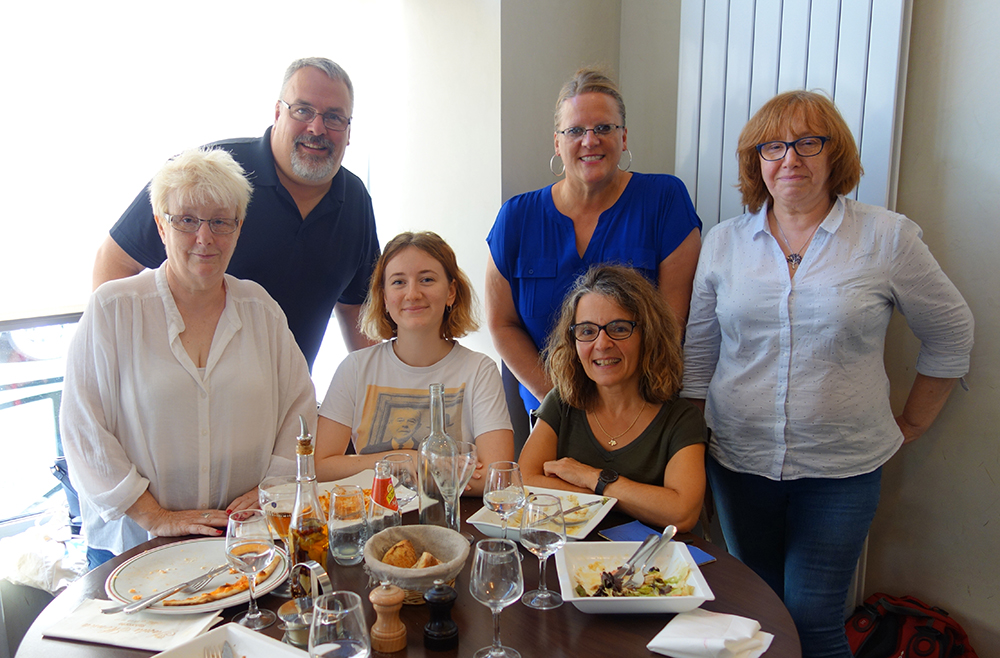 Agnès drove us to the nearby suburb of Montreuil-sous-Bois. Montreuil is the place Marcel and Renée lived before and after the war. As we stood in front of the home that was once theirs, I absorbed every new thing they told me about Renée’s garden, about the pigeons Marcel raised, about the layout of the home.I also learned not only were Aaron and I seeing the home for the first time—Eugénie was as well. I was delighted she was getting to know more about her family throughout this process, too.Whereas Agnès and Nadine had many childhood memories of time with their grandparents in the village of Berchères-la-Maingot, many of Valerie’s childhood memories were made in Montreuil. Valerie’s family lived in a rural village, so traveling to another rural village didn’t hold much appeal. Instead, she explained, she and her parents would come to the city to visit Marcel and Renée. 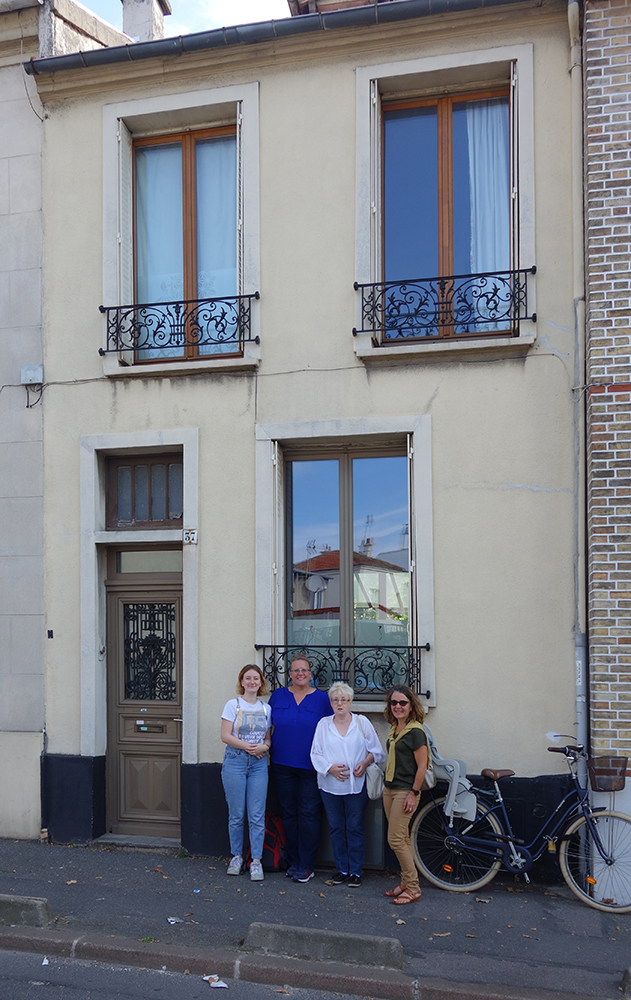 Standing in front of the former home of Marcel and Renée Heuzé, Montreuil-sous-Bois.

Neither Agnès nor Valerie knew precisely where the tomb was located, so we stopped at the reception office so a cemetery administrator could direct us to the appropriate section. Once in the designated section, we walked the rows of tombs looking for the Heuzé family name. Unlike in the US, where caskets are often buried in the ground and there is ample space between each grave, in France tombs are above ground, and are placed tight together. But, none of us could find it. Just as Agnès approached a groundskeeper to confirm whether we were in the right place, Valerie found it. The thing she noticed was not a carved name, but a plate-size lucite heart she recognized from Renée’s funeral. Over the years it had yellowed from the sun, but it was undeniably familiar. Many of the neighboring tombs’ flat tops were covered with plastic flowers or photos or mementos such as seashells. In our case, the flat stone held a familiar lucite heart.

As we gathered around, Valerie pointed to Marcel’s name. It was carved onto the side in letters that were about an inch and a half tall. Traces of garnet-colored paint could still be seen. Agnès placed my fresh flowers in a cemetery-provided metal vase, but we noticed the vase leaked. Then we noticed the water draining out of the vase made the carved letters a bit easier to see, so Aaron found a bucket, filled it with water and drizzled it over the tomb so we could see the carvings more clearly. Renée’s name was carved on the opposite side of the tomb.

We lingered and talked. The water slowly evaporated in the bright sun, making the carved letters nearly invisible again. It was such an honor to be there, to finally place flowers on Marcel and Renée’s grave. The enormity of sharing that moment with Marcel’s family is something I’m still processing.

I took a handful of photos, though it was a challenge to find a place to stand where I wasn’t casting a shadow directly onto the tomb. I moved this way and that. I tried holding the camera far to the side. I walked around the neighboring tomb to try to find an unimpeded angle. Eventually, the sun and heat were beginning to take a toll, and everyone was ready to go. I lifted my camera to take one last picture, and there is was again: my shadow. The shadow of my head was directly over his name, and it felt right, somehow. Inevitable, perhaps. Instead of moving away, I snapped the image, realizing the shadow I had a hard time eluding might be the perfect metaphor for this years-long connection that is physically tangible yet also seems utterly ethereal. 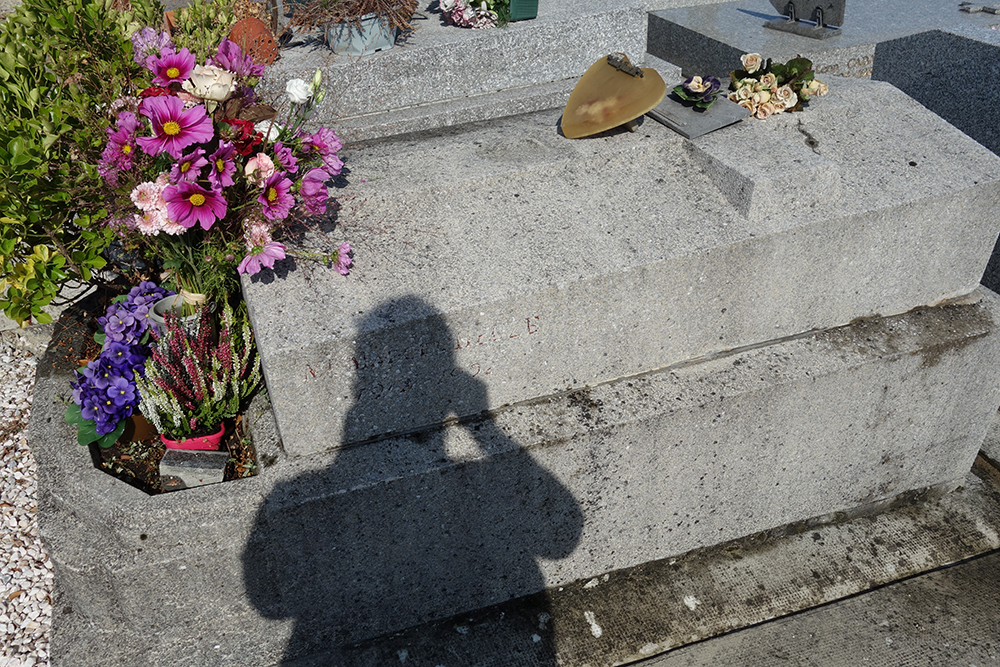 We walked back to Montreuil’s city center, where we indulged in glacé from a stand that had provided ice cream treats to Montreuil’s residents since the 1930s. Agnès’s son, Louis, joined us. We chatted again for a long while, before finally saying à bientôt, see you again. And Valerie said in her earnest, but limited English, “today was a good day.”

My deep gratitude goes to Agnès Boucon for planning and coordinating our afternoon together, to Valerie for traveling to Paris, and to Eugénie for a masterful job of translating during our visit.

On To Normandy
The morning after our visit, Aaron and I traveled by train to Normandy. We are so glad we were able to make time to go—it was a powerful and rewarding experience. On Saturday we hired a guide to take us to Utah Beach, Omaha Beach, and the American Cemetery. She also drove us to Saint-Mère-Église (the village famous in the movie The Longest Day), Carentan, Point du Hoc (where we could go inside a bunker and where massive craters in the earth give you a sense of the scope of the destruction), and the Catholic church at Église Saint-Côme-et-Saint-Damien d’Angoville-au-Plain where two American medics cared for eighty or so American and German soldiers. Our guide, Lena, was an exceptional historian. She had a binder filled with maps, photos and biographies that she referenced as she took us from place to place. Aaron and I were amazed at the scale—we had no sense that it was 100km from Utah Beach to Sword beach. We were also amazed at how small farms, villages and hedgerows appear locked in time.

If you ever have the opportunity to go to Normandy, please go. 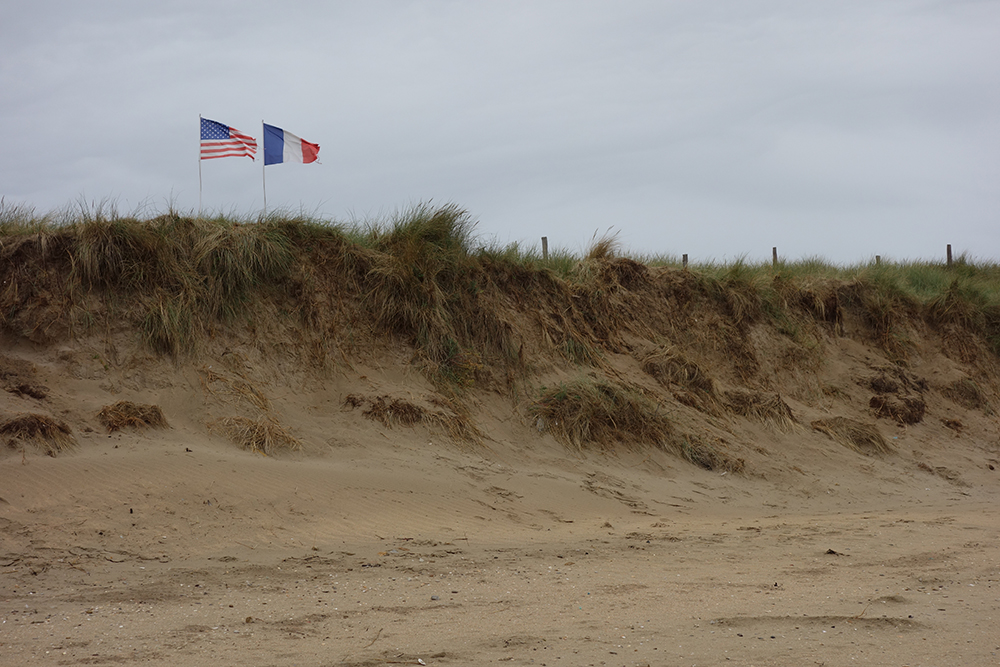 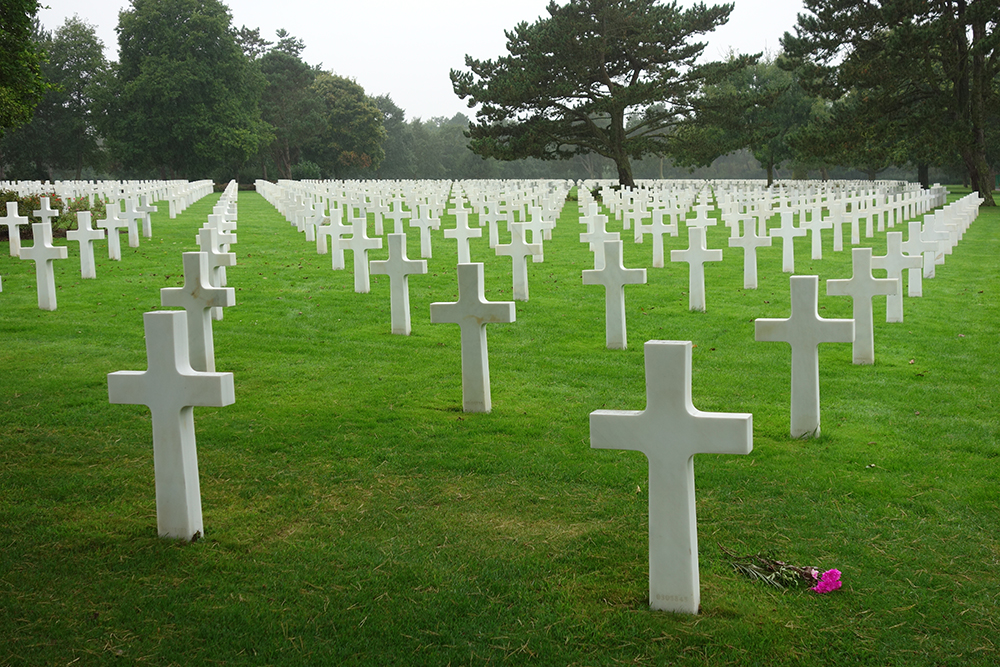 The solemn grandeur of the American Cemetery in Colleville-sur-Mer