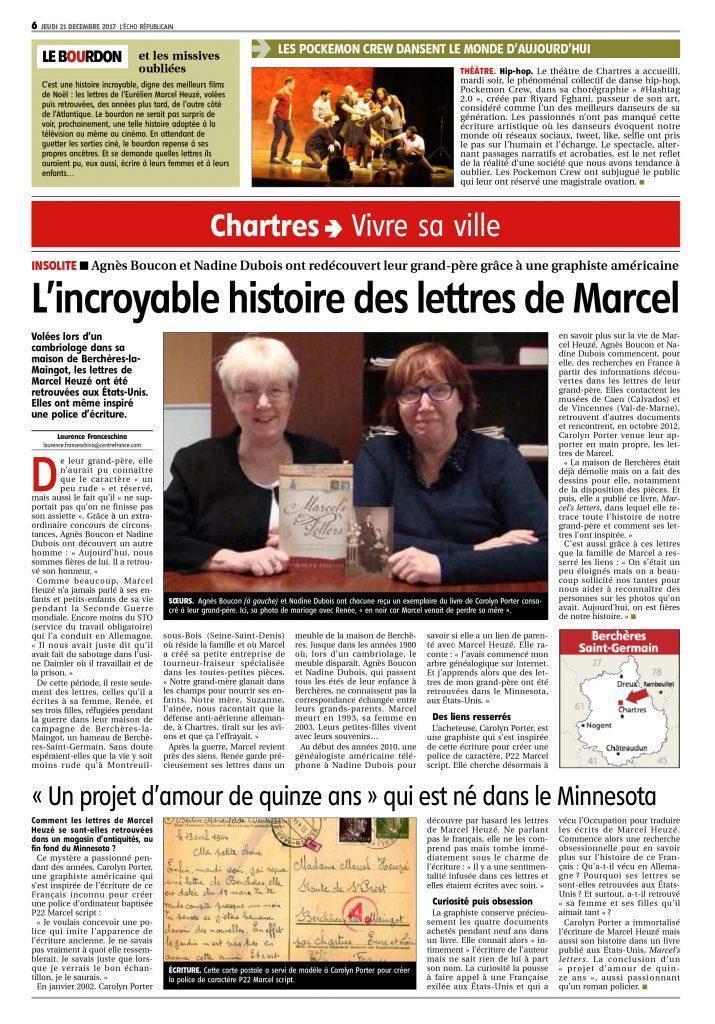 The incredible story of Marcel’s letters

[Caption under photo] SISTERS. Agnès Boucon (left) and Nadine Dubois each was gifted a copy of Carolyn Porter’s book about their grandfather. Marcel—pictured here in his wedding photo with Renée—both “wearing black, in mourning his mother’s death.”

Stolen during a burglary at his home in Bercheres-la-Maingot, Marcel Heuzé’s letters were found in the United States. They even inspired a writing font.

The sisters couldn’t have known much more than that their grandfather’s character was “a bit rough” and reserved, or the fact that he “couldn’t stand to see food left on one’s plate”.

Thanks to an extraordinary confluence of circumstances, Agnès Boucon and Nadine Dubois have discovered another man altogether: “Today we are proud of him. His honor is restored.”

Like so many, Marcel Heuzé never spoke to his children and grandchildren of his life during the Second World War. And even less of the Forced Labor (Service du Travail Obligatoire, or STO) that was then being conducted in Germany. “He just told us he had sabotaged the Daimler war factory where he worked, and the prison.”

From this period, only his letters remain, those he had written to his wife, Renee, and to his three daughters, who took refuge in their house at Berchères-la-Maingot, a hamlet of Bercheres-Saint-Germain, during the war. Without a doubt they hoped that life there would be less harsh than in Montreuil Wood (Seine-Saint-Denis) where the family had lived, and where Marcel had created his small business specializing as a metal parts lathe-operator/miller. “Our grandmother gleaned in the fields to feed her children. Our mother, Suzanne, the eldest, told us that the German anti-aircraft defense, in Chartres, was shooting at the planes and that scared her.”

Following the war, Marcel returned to his family. Renee kept his precious letters safe in a cabinet in the Becheres home until the 1980s, when the cabinet disappeared during a burglary.

Agnes Boucon & Nadine Dubois—who passed their childhood summers at Berchères—hadn’t known of the correspondence exchanged between their grandparents. Marcel died in 1993, and his wife in 2003. Their grand-daughters live among their souvenirs/memories.

In the early 2010s, an American genealogist reached out to Nadine Dubois asking if she was part of the family line of Marcel Heuzé. She relates: “I had started my family tree on the Internet. And I learned then that letters from my grandfather were found in Minnesota, in the USA.”

Tightened Ties
The buyer, Carolyn Porter, is a graphic designer who was inspired by this handwriting sample to create a character font, P22 Marcel script. She began seeking more details about Marcel Heuzé’s life. Agnès Boucon and Nadine Dubois began their search in France on Porter’s behest, and based on the information discovered in their grandfather’s letters. They contacted the museums of Caen (Calvados) and Vincennes (Val-de-Marne), found other documents and met in October 2012, when Carolyn Porter came to hand-deliver Marcel’s letters.

“The Berchères’s house was already demolished but we made drawings for her, especially detailing the arrangement of the room locations. And then, she published this book, Marcel’s Letters, in which she traces the whole story of our grandfather, and how his letters inspired her.”

It’s also thanks to these letters that Marcel’s family has tightened their ties: “We had been a bit remote but we have made many enquiries of our aunts to help us identify people in the pictures that they had. Today, we are proud of our history.”

“A fifteen-year labor of love” that was born in Minnesota
How had Marcel Heuzé’s letters at last found their way to an antique store, deep in small-town Minnesota?

The mystery had been percolating over the years for Carolyn Porter, an American graphic designer who was inspired by the handwriting of this unknown Frenchman to create a computer font called P22 Marcel script:

“I wanted to design a font that mimics the appearance—the look and feel—of the older cursive handwriting. I did not know in reality what it would look like. I just knew that when I saw a good sample, I would recognize it.”

In January 2002, Carolyn Porter quite by chance discovered Marcel Heuzé’s letters. Not speaking any French, she didn’t understand their contents, yet fell immediately under the spell of the handwriting: “There is a sentimentality infused in these letters and they were written with such care.”

Curiosity and then obsession
The designer kept the four precious documents she’d purchased in a book for a period of nine years. By then she “intimately” knew the author’s handwriting, but without knowing more of him than his name. Curiosity pushed her to reach out to a Frenchwoman exiled in the United States and who had lived in the Occupation, to translate the writings of Marcel Heuzé.

And so began an obsessive search to find out more of the Frenchman’s life story: Why had he lived in Germany? Why were his letters found in the United States? And most importantly, did he find his beloved wife, and the daughters he loved so much?

Carolyn Porter has immortalized the handwriting of Marcel Heuzé as well as his story in Marcel’s Letters, a book published in the United States. The end result is as much a “Fifteen years-long Labor of Love” as an exciting detective story.

[Caption below photo of postcard] The Font. This postcard served as a model for Carolyn Porter to create Marcel P22 script.

———
I want to extend a special thanks to Rubin Latz for translating the article into English.