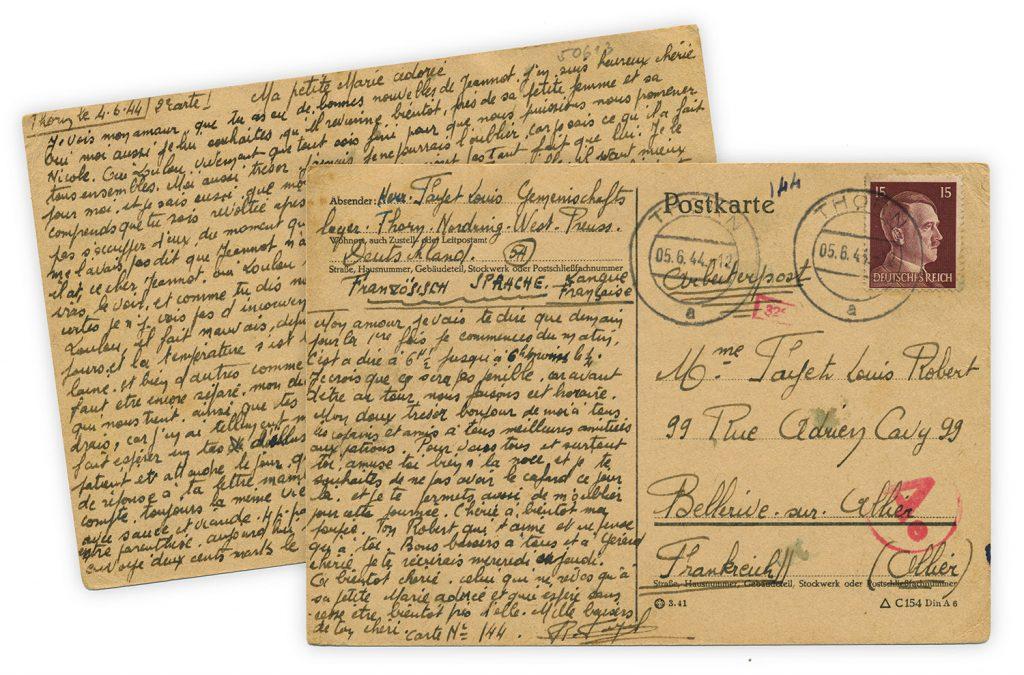 I see, my love, that you have received good news from Jeannot (Johnny). I’m happy about that, darling.

Yes, I also wish for him to return soon, close to his little wife and his Nicole. Yes, Loulou, let’s hope that everything will be finished soon so that we can all stroll together.

I, too, [my] treasure, never could I forget him, for I know what he has done for me, and I know also that my brother and Jaja have done as much for us as he has. I understand that you are revolted by them, but let them alone. It’s better not to bother with them, from the time when they don’t bother with you, nor with me. My darling, you hadn’t told me that Jeannot hadn’t wanted to let you pay for the tire. How kind he is, this dear Jeannot. Yes, Loulou, you are right, you will take him something when you go in the evening, and, as you say, we will certainly invite him to Gerard’s baptism!  Of course I don’t see any problems with that. The weather here, dearest, right now, Loulou, has been bad for about a week.  It rains almost every day and the temperature has dropped. I had to take out my woolen vest and many others here did the same! Yes, darling, just thinking that the weather was so beautiful and that we must still be separated, my darling, it’s so sad. In short, it’s only hope that holds us together, as well as your dear letters. Aside from that, I hardly know what will happen to me, because I’m so bored. Life is so monotonous that any little thing gives us hope in illusions. Well, that’s what it is, there’s nothing to do about it. We must be patient and wait for the day when the door of happiness will open for us!! Darling, I have finished answering your letter. Now I will talk to you about myself. Nothing much new here, always the same thing and the same work. Today we had, at noon, mashed potatoes with sauce and meat, 4 little white rolls, [?], sausage, butter and cheese. That’s all, between parentheses. Today there wasn’t any fat [?]. I would tell you also, darling, that I sent to you two hundred Marks on June 2nd. You know how much that is in French money!!!

My love, I’m going to tell you that tomorrow for the first time I’m starting [work] in the morning, that is to say at 6:30 until 5:45. I believe that will not be hard, since before being on duty we had this schedule. My sweet treasure, [say] hello from me to all the buddies and friends with my best regards. For all of them and especially you, have a great time at the wedding and I hope that you won’t feel sad on that day, and I allow you to forget about me on that day. Darling, I’ll see you soon, my doll. [From] Your Robert who loves you and thinks about you all the time. Kisses to all and to Gerard, darling. I will write to you again on Wednesday or Thursday. See you soon, darling. The one who dreams only of his little adored Marie and who hopes ceaselessly to be near her soon. A thousand kisses from your dear Robert. Robert Fayet

This card was translated by Janet Gerson. Janet contacted me after reading Marcel’s Letters and we began a conversation about the issues and challenges of reading/translating old handwriting. Before long, we discussed having Janet translate one of the several yet-untranslated postcards I have from WWII French forced laborers! Janet’s first French teacher (in high school) was a charming German woman named Madame Rose, whose handwriting style fascinated her. She majored in French in at Allegheny College (Meadville, PA) and studied at the Sorbonne in Paris during her junior year. She taught French in public, parochial and private schools for 37 years, in PA, TX and MD.  She noted translating these cards is fun because it combines her language skills, understanding of French culture and history, and interest in calligraphy.

A couple of additional notes:
– The return address includes the word “Lager,” which readers of Marcel’s Letters know translates to “Barrack.”
– I see three censor marks. Can you find them?
– The city of “Thorn, West Prussia” is the city of Toruń in Poland (“Thorn” is the German spelling).
– I asked Janet if “Loulou” was a nickname and she noted many French names now (and at the time of the letter ‘most/all’) were hyphenated, it was very likely ‘Marie’ was ‘Marie-Louise’ and “Loulou would be the most likely name used by her family, and of course by her husband.”
– The funny-looking “P” under the “F” in “Fayet” and “Frankreich” remains a mystery. Is it meant to be a loop on the crossbar of the “F”? Or something else entirely? If you know what this funny “P” is, let me know! 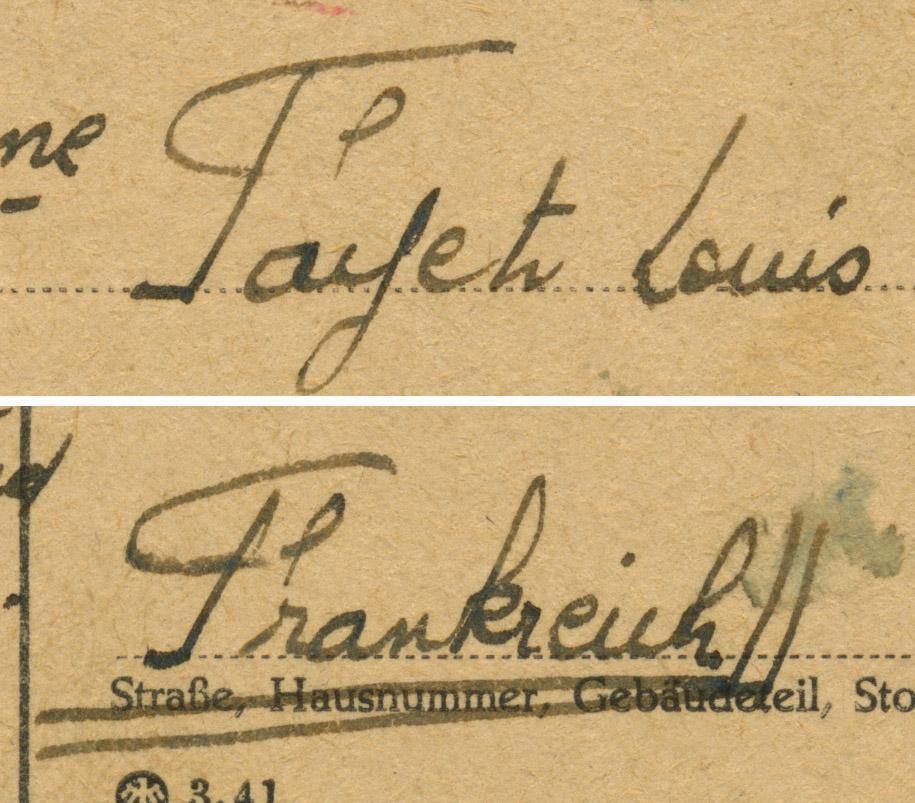