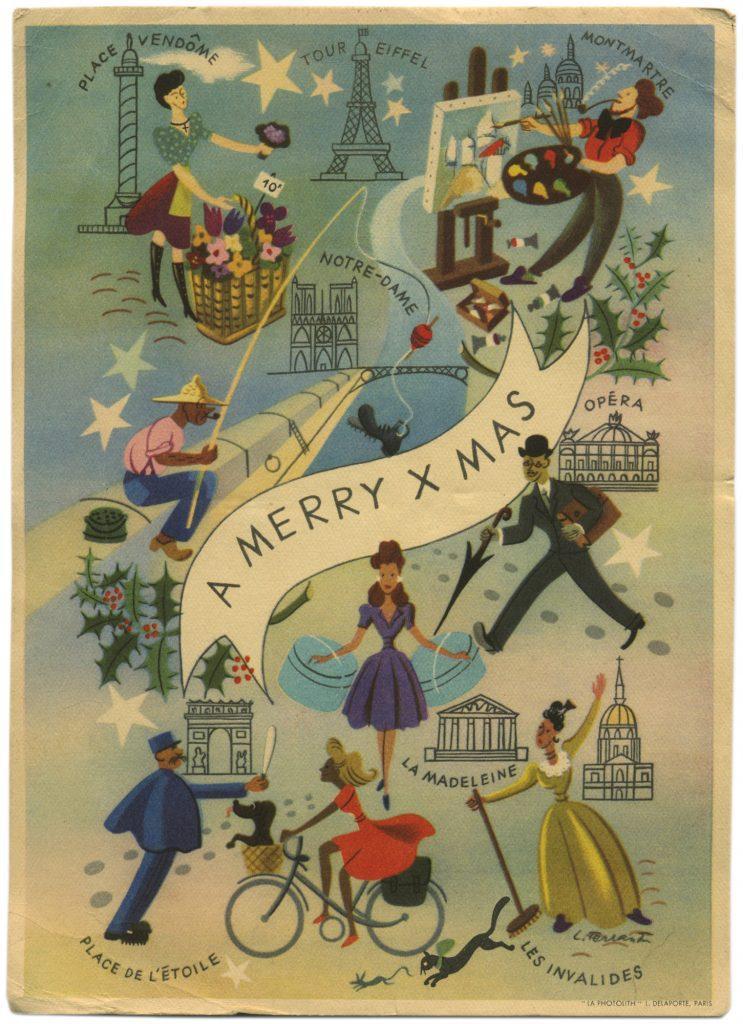 There are several reasons I was tickled to find this illustrated postcard.

The card was mailed November 24, 1944; three months after Paris was liberated. The whimsy in the illustrations seems to capture the joy of the time. Army Captain Paul “Odell” Conrad mailed the card to his parents in Winston-Salem, North Carolina, and included this handwritten note on the back:

I have already received the fruitcake. Thanks very much. It was very good. We don’t get much of such things. Tell Lucas Jones Hello for me. I haven’t written him yet. Bet he is having a good time, no matter where he is.

I hope you have a Merry Christmas.
Odell.

I found this postcard on eBay. Most eBay purchases arrive without any kind of note about the object or the seller. But Odell’s postcard came with a long note. The seller, Julianne, was liquidating a lifetime of acquired items to reduce the amount of work her children will have to do to close her estate. “Collecting things with historic value has always brought joy to my life. I often ‘rescue’ things from the landfill because I know they have historic value (or they do in my eyes). I like collection toys because I didn’t have many when I was a child.

“As I attended estate sales and auctions and survey all their “stuff” laid out in such an impersonal manner, I considered their life: what they did, what they liked. Much of their personality was on full display. … Most people (buyers)…didn’t give a single thought about the person behind all these possessions.

“I don’t want that to happen my my things. I want to make sure all of my personal belongings and all the things I’ve collected over the years go to people that want them will enjoy them as I do.”

I was so moved by her note that I sent Julianne a message. I learned she found Odell’s postcard at an estate sale. “It was in a box of paper destined for the landfill,” she wrote. “The children and grandchildren had no interest in keeping any of the cards, letters, pictures and other papers. I asked if I could purchase and they agreed. The history in that box was amazing and this was just one of the treasures. I have spent many cold winter evenings on the floor with that box. Since my father was active duty in WWII, I have a fascination with relics from that conflict. I have donated many items to museums that were also destined for landfills.”

I am so grateful Julianne found—rescued—this card from the landfill. I’m so grateful for the people who work to preserve history. And I was particularly touched to find this card because it is by the same illustrator as postcards I found years ago. View those other postcards here.