Let me back up. Two weeks ago, I picked up my office phone to hear a 90-year-old woman with a crisp French accent state her name — Nelly Trocmé Hewett — followed by the astonishing claim her father had been friends with Marcel.

I knew who Nelly was, of course. She is the daughter of André and Magda Trocmé. During World War II, André Trocmé was a pacifist pastor in the remote French village of Le Chambon-sur-Lignon. In his sermons, he denounced Nazi religious discrimination and urged his congregation to hide Jewish refugees. By the end of the war, an estimated 3,500 refugees — many of them children — were saved by the villagers in Le Chambon and the surrounding communities. André and Magda Trocmé are listed among The Righteous Among the Nations by Yad Vashem, and Le Chambon is one of only two towns honored as Righteous Among the Nations (the other town is in Holland). Learn more about Le Chambon here.

Nelly was a teenager during the war, has lived in Minnesota for decades, and today I had the incredible honor of meeting her in person.

One of the many, many things that made me smile during our lunch was how she referred to the pastor Marcel Heuzé as her Marcel — “my Marcel,” she would say — and she called the STO worker “your Marcel.” She had not yet read Marcel’s Letters, so she had no way of knowing why I was tickled by that language. I told her in the book I, too, used the phrase “my Marcel.”

Our lunch conversation meandered from stories about Le Chambon-sur-Lignon, to books she thought I might like to read, to stories of some of the children who spent the war in her village. She shared one particular story she thought I would appreciate (and indeed I loved it!): the amazing story of Peter Feigl’s diary, another handwritten document lost then found decades later. Watch the video here.

Nelly reinforced information I’ve heard from others about the handwriting of my Marcel: that he most certainly learned handwriting in public school. “It was the classic style of handwriting taught in primary school — not academic handwriting,” she noted. It was likely, she speculated, he stopped formal education at the age of 14 when he would have earned a Certificat d’Etudes (Certificate of Studies). From there, he would have gone on to a trade school or an apprenticeship. With that in mind, she found Marcel’s grammar and spelling remarkably sophisticated.

She was amused with a particular term of familiarity in one of his letters. Marcel mentioned a barrackmate named “Mimile.” Nelly noted his friend’s name was probably actually “Emile.” Changing it to “Mimile” was a term of fellowship men might use for each other, in a more normal time, at a bar or while watching a game.

Nelly even tried to help me with French pronounciation, which I am afraid, is a hopeless cause. She tried to help me understand subtle differences between the sound “oooooh” and the similiar “oooooh”. To my ear the two sounds were exactly the same. She offered a polite laugh, and I could see her surprise at my inability to tell the sounds apart.

All in all, it was an amazing lunch filled with history and stories and laughter.
My brain is still spinning. 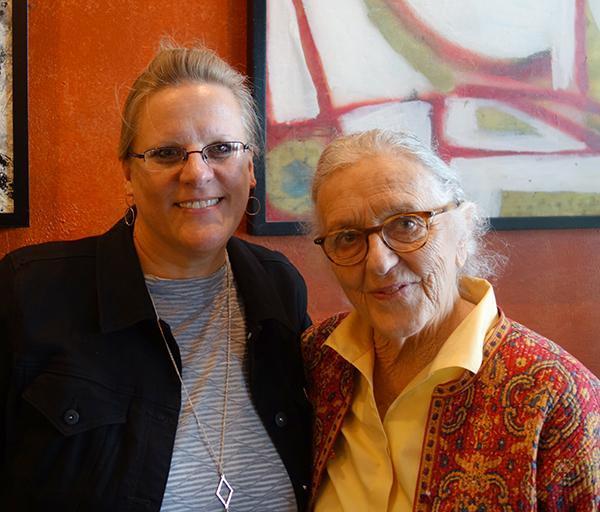 Want to watch a presentation Nelly gave in 2016? See the video here.

A Good Place to Hide by Peter Grose

A Portrait of Pacifists: Le Chambon, the Holocaust, and the Lives of André and Magda Trocmé by Richard P. Unsworth

We Only Knew Men: The Rescue of Jews in France during the Holocaust by Patrick Henry

Hidden on the Mountain: Stories of Children Sheltered from the Nazis in Le Chambon by Karen Gray Ruelle and Deborah Durland Desaix

Angels and Donkeys by André Trocmé. The stories in this collection were told by Pastor André Trocmé to the children of Le Chambon-sur-Lignon while France was under seige, occupied by Hilter’s troops. The stories address themes of hope, resilience, peace, hospitality and doing good deeds.

Wolves at the Door: The True Story Of America’s Greatest Female Spy by Judith Pearson. Virginia Hall was one of several people I learned about while talking with Nelly. Though Virginia is only tangentially connected to Le Chambon, she sounds like a fascinating woman. “Virginia Hall left her Baltimore home in 1931 to enter the Foreign Service and worked for the British Special Operations Executive. She was assigned to France, where she helped the Resistance movement, escaped prisoners of war, and American Allied paratroopers. By 1942 she was considered so dangerous to the Gestapo that she had to escape over the Pyrenees mountains―on an artificial leg, no less. When she got to England, she was reassigned to France by the OSS, disguised as an old peasant woman. She helped capture 500 German soldiers and kill more than 150, while she sabotaged Nazi communications and transportation.” (from description on Amazon)