Over the years I’ve acquired four French WWII POW postcards. The cards are different from letters men like Marcel wrote in that they seem rigid, rule-wise. The handwritten messages strictly align to the lines provided. The mailing side of the postcard is formal and practical: lines are provided for the recipient’s address, for the sender’s name, the sender’s rank, prisoner number (e.g., 48930), and the camp name/number (e.g.  Stalag IID, No. 353). Most of the cards bear an “Approved” stamp that also bears the name of the camp. My understanding is that POWs could write two cards per month; perhaps it wasn’t worth the risk to try to bend or break the rules.

Though the cards themselves don’t reveal anything significant, it is always fascinating to peek into the moments in time captured on these small pieces of paper. It’s immediately clear what’s most important: maintaining a connection to loved ones, food, and a yearning for news from home.

I’ve included the notes from the translator, Janet. She raises some good questions, which I am not able to answer. Could Bernard really receive bread? Was Georges about to send more money? What is an Emperor Undershirt? 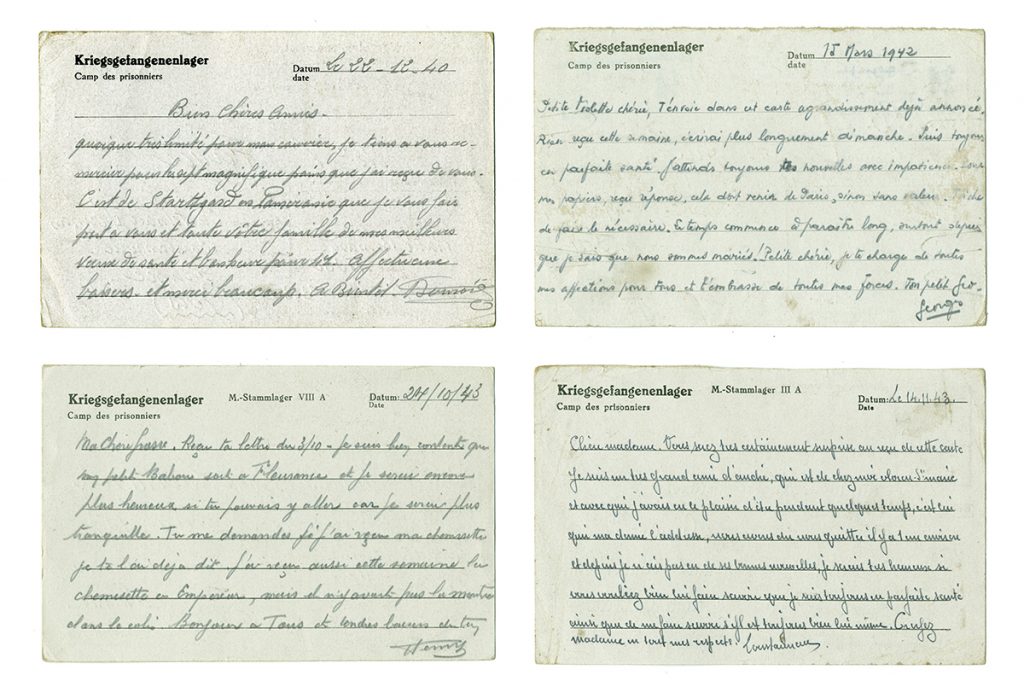 Very dear friends, Although [this is] very limited for my mail, I would like to thank you for the seven magnificent breads [loaves?] that I received from you. It is from Starttgard in Pomerania that I am sending to you and your whole family my best wishes for health and happiness for [19]41. Affectionate kisses and thank you very much. See you soon. Bernard

Translator’s Notes:
– The greeting has feminine plural words: chères amies. I don’t have the address side of the card, but wonder who these women were.
– It’s amazing that anyone sent bread to a POW. French bread doesn’t have preservatives, so it gets stale in a day. I don’t understand this, but that’s what it says! Maybe a different kind of bread?
– Pomerania is a coastal farming area along the North Sea, currently part of Germany and Poland. I looked at a map and don’t see that town, but it might have been the name of the POW camp.

Darling little Violette, I’m sending in this card the increase [that I] already announced to you. [I have] received nothing this week, [I] will write more on Sunday. [I] am still in perfect health. I’m really looking forward to hearing from you. For my papers, [I have] received [a] response. It should come from Paris, otherwise it’s of no use. Try to do what’s necessary. The time is starting to feel long, especially since I know that we are married! Little darling, I send my deepest affections for everyone and I kiss you with all my might. Your little Geo. Georges

Translator’s Notes:
– Is the ‘increase’ an amount of money that he sends to his wife?

My dear [?]rasse, [I have] received your letter of October 3. I’m very happy that my little Babou is at Fleurance and I will be even happier if you could go there because I will be more at ease. You ask me if I have received my undershirt. I already told you. I also received this week the Emperor undershirt, but the watch wasn’t in the package. Hello to everyone and tender kisses from your Henry

Translator’s Notes:
– Cute nickname for someone (masculine singular, so does not refer to his wife): mon petit Babou
– What is an Emperor undershirt? Possibility: a knit shirt with stripes is called a marinière (sailor shirt) in French or matelot (sailor); in English it’s called a Breton shirt because most sailors were from Brittany. Trivia: It was designed in 1858 for French sailors, with 21 stripes to represent Napoleon’s 21 naval victories against the British. The reason for stripes was to help spot an overboard sailor.
– It looks like the word ‘la montre’ (the watch) on the next-to-last line. Could someone send this to a POW?

Dear Madame, You will very certainly be surprised to receive this card. I am a very good friend of [auché], who is from [nivé vloicu Ste Marie] and with whom I have had the pleasure of spending some time. He’s the one who gave me the address. You must have left about a year ago and since that time I haven’t received any good news from him. I would be very happy if you would please tell him that I am still in perfect health, and will you tell me if things are still going well for him. With my greatest respects, [signature illegible]

Translator’s Notes:
– The writer says that he is a very good friend of someone, but the name is not capitalized. It looks like ‘auché’. The handwriting is clear, so this is something that I don’t understand.
– This is something that I can’t figure out. It looks like [nivé vloicu Ste Marie]. Vloicu is a Romanian surname. Ste = Saint (feminine)….but could also be ‘sur = on’ but would not be capitalized. Unclear!